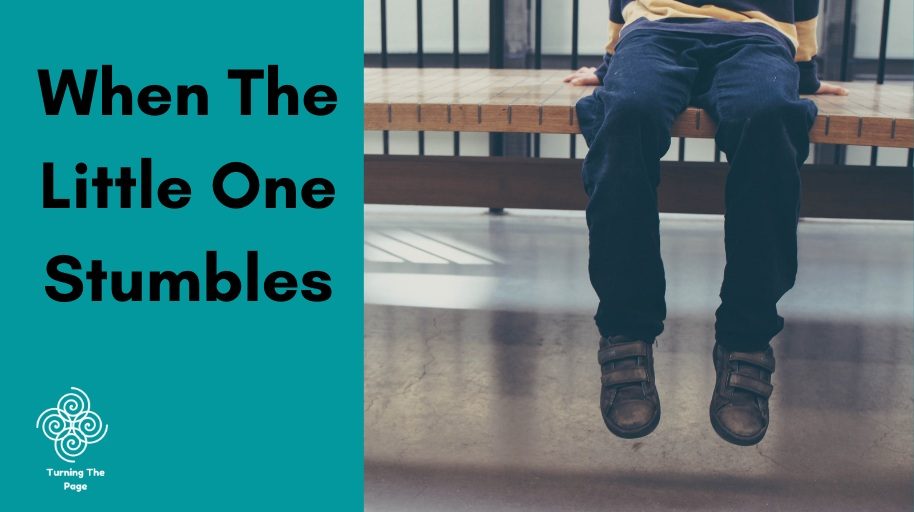 We have all been a little one, a child, and we stumble, but we can grow from the stumbles, and we can learn new truth and find new hope.

I’ve heard many stories of abuse, but some of the worst are when subtle little lies have, with organized precision, been sewn into a child’s life. It’s evil.

Knowing the vulnerability of a child’s mind to learning and absorbing new information and behaviors, someone has, with malicious intent, corrupted a mind made in the image of God. Those lies take root and grow into deformed thinking and behaviors far from God’s intended delight.

I’ve seen adults with low IQ, intellectually challenged and disabled, being taken advantage of because of their child-like naivety. It was repugnant and evil. I called the Police, but nothing could be done.

Then there is another kind of abuse—the one where the child receives messages from another hurting human. Hurt people hurt people. The child hears the messages – verbal and non-verbal and believes them as truth.

Words that couldn’t be taken back and words that dug deep into the soul of that little child.

A thinking track is laid down in the child’s mind. A small little tiny microscopic pathway, and then the next day, another abuse is added to the brain.

This neurological pathway in the brain is gaining strength. That soft, malleable brain takes its cues from the environment around it and shapes its pathways according to what it’s been told.

When the followers of Jesus wanted to know who was the greatest, the one who got the pride of place position at the table, Jesus turned their earthly kingdom thoughts of achievement upside down. He still does.

Whoever becomes humble like this child is the greatest in the kingdom of heaven. Whoever welcomes one such child in my name welcomes me.

“If any of you put a stumbling block before one of these little ones who believe in me, it would be better for you if a great millstone were fastened around your neck and you were drowned in the depth of the sea.

Woe to the world because of stumbling blocks!

Occasions for stumbling are bound to come, but woe to the one by whom the stumbling block comes! Matthew 18:1-7

Everyone one of us has taken a stumble. Jesus said they ‘are bound to come.’

My little two-year-old granddaughter took a nasty fall the other day and hurt her head. She was playing on a small plastic slide and fell from the top of the slide onto the floor.

She was crying, and her parents comforted her. After a little while, she got back up and quietly got back into life.

I wonder what she learned? Maybe that this world is not as safe as she once thought it was.

My daughter and her husband didn’t maliciously set up the slide with the intent of her falling. It was an accident, but they felt bad for what had happened. They could have prevented it by not having a slide, not allowing her to try new things.

Wrapping people in cotton wool chokes out the discovery of life.

That delightful two old will have many other stumbles in her life, but woe to anyone who sets out to cause her to stumble.

Where has the little one stumbled

I think we all have stumbled and fallen. Something has tripped us up. Hopefully not with malicious intent, but we have all tripped up in our thinking somewhere along the line.

We heard one thing and interpreted it possibly in a manner that it wasn’t intended to be understood, especially by God.  We have interpreted the experience in the most obvious childlike way.

Children are excellent recorders of their experiences but poor interpreters. David Riddell

Some time ago, I watched a teacher berate a child within their care. It was, to be blunt, a shaming exercise and spoke more about the angry world within the teacher’s thinking than about the slight misdemeanor of the child.

But I wonder if the child took the abuse to heart, whether it added on top of any other experiences of being told they stupid.

We all have bad hair days, but we need to be aware that explosions spill over to others and trigger responses in them.

Willing to become a little one

If there is a consistent barrier that I have come across in helping people, it is the resistance to becoming like a child and examining and reinterpreting early life experiences in the light of God’s truth about us.

I think it has something to do with not wanting to admit to ourselves and others that we got it wrong. Or that someone has wronged us.

We would much rather fix the now, but those earliest conclusions will echo and ghost us until we give them a reason for them not to be around. This requires self-examination, work, the forgiveness of self and others, and being open to new truth.

It might mean we come face to face with how we have acted out of our own hurt, which has meant hurt for others. It might mean being honest with our own failings, not just on a surface level but on a level where we feel deep shame and guilt. As I say, it might just mean learning to forgive and have self-compassion.

Jesus said we have to become humble like a child.

Starting over as a little one

I would love to have a time machine to go back to certain times in my life where I stumbled in my thinking.

Where I misinterpreted what happened as a child and put a negative twist on something, and I started developing a thinking track that got deeper and deeper, stronger and stronger.

I want to become like a child again. To have my brain be like a sponge that is open and ready for the truth. I want to be a child in the presence of Jesus, the lover of children. Perhaps Jesus would talk about the many places where the stumbles happened, and seeds were sown into the thinking.

Becoming like a little child – simple, open, soft, and malleable. It’s being open to thinking differently about life. It’s seeing that some of your core beliefs were founded on stumbling moments. Moments that need a new understanding.

Just as when you were a little child, and you interpreted an event in a certain that led you off in a certain thinking track, it’s now time to interpret similar feeling events with new insights.

Children rehearse things until they get them right. They take a few steps and fall. Crawl a while; then they try again. That brain is laying out a new fiber network. They get back up on their feet and try to walk again. They practice and practice until they walk freely and easily. None of that crawling business anymore.

A child wants to learn to play the guitar. A few basic chords, a strum, and many repeated experiences can play a simple song. Eventually, with enough work and effort, they can play complex tunes.

What are the words you have been rehearsing through the network of your brain from an early age?

One of the ways I think Spirit (Holy) does this is that we are brought to places where the invite is given to explore our inner dialogue and story.

Our life gets interrupted by an event. It could be a sentence we hear, a quote, a verse of scripture, something someone says to us, a trauma.

If you’re listening, – Let anyone with ears listen!  ( listening is a spiritual practice), then you will learn to hear the whispers of Spirit saying, ‘This is for you.’

You take that seed of truth, and you nourish it, meditate on it, and grow it into your thinking. It becomes an antidote to the thinking that you stumbled over as a child.

You build it into your daily meditative life.

I have an audio version of my thinking compass that I listen to every day.

I am slowly and surely rewiring my brain. Removing the stumbling blocks and seeing my path clearer and cleaner than ever before.

Do you keep stumbling over the same old tripping hazards?

Perhaps it’s time for you to pray and ask Spirit to illuminate your path, to point out the old ways that need new roadworks. It’s work, but it’s good work.

Being Formed as a Little Child

Photo by Michał Parzuchowski on Unsplash