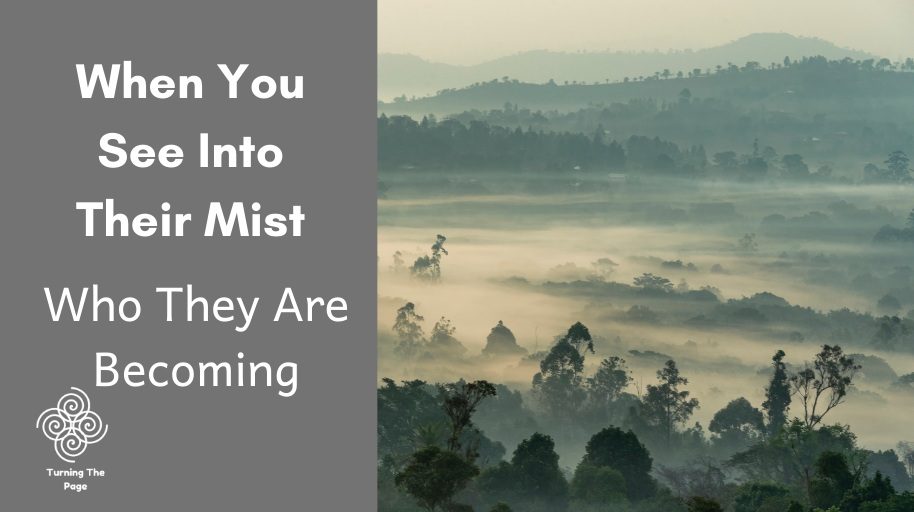 There is a mask or even a mist that we can see something quite wondrous when we see behind or through, but it takes awareness to see the vision of what they are becoming.

There is a drive I take every week to a farm and garden out in the countryside. I leave home early in the morning when it is dark and often arrive at daybreak.

It’s a beautiful drive going over hills, through valleys, and besides a stream with sailboats nestled into wooded banks. But it’s particularly beautiful on those mornings when there is a little bit of mist just sitting above the paddocks and on the river. I have to stop and quietly soak in the beauty.

As the sun begins to light up the sky, the darkness starts to retreat.

It’s light, its movement, it’s a time of transition from night into day. The fog sits and clings to the trees, and I know that within a few minutes, it will be gone.

It’s a special time of day, and so many people miss it. They are asleep to the glory and beauty around them. Or perhaps they are busy with getting ready for the day.

By the time they on the same road that I have traveled, the beauty has moved on, never to be seen quite like that again.

We hurry by, don’t we? It takes a conscious decision to slow down, stop, and take it in.

Many people need to be seen behind the dark or even the daylight of their presentation.

Looking a little beyond to the becoming

It’s a simple prayer and goes something like this.

What would it be like to have the eyes of Christ?

The eyes of Christ that can look right through all the parades, charades, and games that we all play. To see under the mask of makeup and self-protection.

They see the tears, they may even shed a few with you, but they don’t reject or abandon.

These are the eyes that have traversed the dark with you and know that a new day is coming. They see something different from the experience that you have of yourself.

It was a moment in the conversation that I wasn’t quite expecting. Good things often happen unexpectedly.

We had been talking for a few minutes about a painful moment in their lives, and then I saw tears start to trickle down the face. They were hurting, and I felt inadequate. I was meant to.

I prayed, ‘Help me to see them as you see them.’

It was that moment of time between the darkness of the night and the dawning of a new day. The new day would be them shifting out of a deep conversation and into the business and activity of the day.

There was a moment, and I wanted to see the beauty and purpose of it.

Who were they becoming? What was this moment of misty dawning awareness bringing forth for us to explore? I was both excited and still.

I knew that Aslan was on the move. It wasn’t safe, but it was good.

Sure enough, ten minutes later and it was back into functional day-to-day business. Let’s keep busy to keep us one step ahead of the pain of the night and the unknown.

I recently saw quite a funny cartoon.

The first image shows Simon, the fisherman picking up a pack of business cards from a printer.

The next image starts with a little caption

In the image, it has Jesus saying to Simon.

‘Simon! from now on, you shall be known as Peter!

Peter looks a little annoyed that he had just got all these business cards, and now he has a name and identity.

This story refers to the encounter between Peter and Jesus that we find in John’s telling of Jesus’story.

Andrew, Simon Peter’s brother, was one of the two who heard John’s witness and followed Jesus.

The first thing he did after finding where Jesus lived was find his own brother, Simon, telling him, “We’ve found the Messiah” (that is, “Christ”).

He immediately led him to Jesus.

Jesus saw something in Simon and wanted to affirm it. There was a vision of who Simon was to become. A rock of strength for a new move of God in the world.

I wonder if Jesus would suggest a name change for you. Maybe a divinely glorious nickname. Something to signify who you are becoming.

I know many people who have changed their name.

Often it’s a bride, and they change their surname to that of their husband, but I have known someone who changed their name completely.

They changed their name because their brother was well known in New Zealand for certain crimes. The surname was not a common surname like Smith or Jones; rather, it was quite rare to have a name like this.

So they decided to change their name because of being constantly asked about their brother. They felt slurred with the association. They changed their name to change an association with a particular story.

Jesus was saying to Simon that this is your new story, and it’s beginning to unfold. Yes, the business cards of fisherman might have suited him for a time, but now it was going to be different. Jesus saw in him a rock.

Who are you becoming

Someone once said to me.

‘I wonder what God will have me doing in the future?’

I felt a little sadness in my soul when I heard this because all the deep work that they were doing in the area of the soul wasn’t about getting them ready to do something. It was more about who they were becoming.

What was happening in them was change, and it was beautiful.

As I got glimpses through the mists of their pre-dawn life, I became excited. Something was beginning to birth in them. It was a new person.

Something, of course, would emerge as a ‘doing’ out of their ‘being.’ It’s only natural that there would be an overflow out of a full cup.

But when we focus on the ‘doing,’ we lose sight of the delicate artwork of the ‘being’ that Spirit is crafting.

There is a mist, a river, a sunrise that we need to stop and look at, and then give thanks.

The vision for the ego

I have heard them many times. A pastor, a church leader, a ‘superstar prophet’ flown from overseas with much fanfare to give out a ‘special’ word.

A word is given, and people are told they are going to be great leaders and teachers. Healing, wealth, prosperity, freedom, etc…

All of this touches the ego and a human desire for more: more recognition, self-worth, self-styled kingdom building.

How many times have people had their hopes built up by overinflated puff balls.  Then it doesn’t happen. Maybe you heard it wrong. Perhaps you need to do more, follow the rules more, give more, and of course, sin less.

It all becomes an activity of doing more rather than the discovery of becoming more. The ‘vision’ and ‘word’ seem to be more about building up the organization than the organism (you).

I get excited about millimeters.

It’s the little things that get me most excited—those little millimeter changes in the soul.

In writing to a church that was at risk of becoming bound up in law and fundamentalism, Paul wrote about what to look for in one’s becoming.’

What happens when we live God’s way?

He brings gifts into our lives, much the same way that fruit appears in an orchard—things like

When I’m in those tender moments of transition with people, those misty mornings moving from dark to day, I look for the millimeter growth of fruit.

How is patience growing? Are they learning to be kind to themselves and others?

The fruit of love is coming along well, and they are so gentle with their tender heart.

What about the joy that is starting to bubble through the rocks of pain?

A new sense of peace is starting to settle on disturbed times.

Yes, Aslan is definitely moving in this one.

Would you Know my TRUE Name

God Sets the Lonely in Families

Photo by Edouard TAMBA on Unsplash