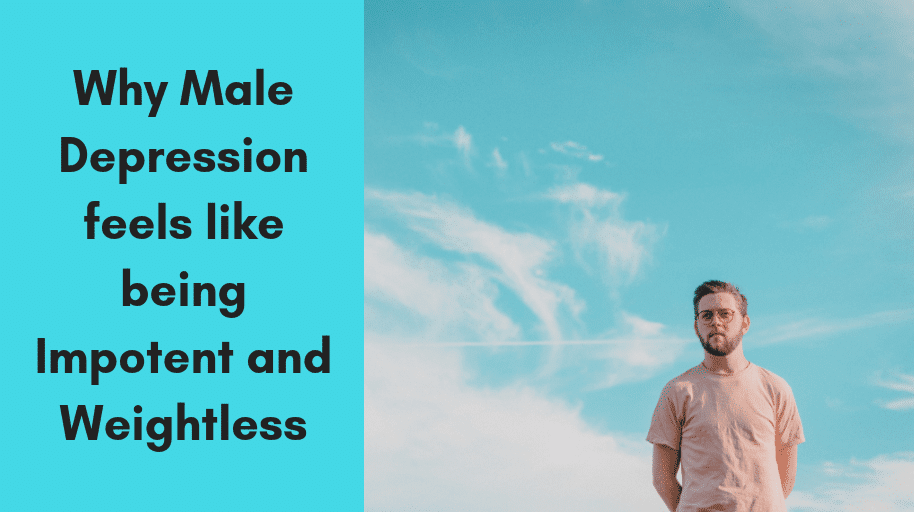 Underneath the depression of a male is a feeling of being impotent and weightless. The man has lost connection with his potency, and the spirit has been crushed.

‘Have I made a difference’? and ‘Has my life mattered?’ are two questions that sit behind the stage curtain of many men’s lives.

With a velcroed negativity bias, the downward spiraled track, to the pit of depression can become a well-worn path.

It was when he started to recall events of some 30 years ago that I saw the emptiness of soul. He was feeling both impotent and weightless. Sure he had moved and had entered into the crisis, but the results still haunted him.

Years later he was impotent and lacked the confidence to move. Depression had clawed its way around his soul. Guilt and shame found crevices to grow in.

A man is one who remembers and moves

The Hebrew word for Male is ‘Zakar’ (Zac ab).

Which means to remember, recall, call to mind.

The word ‘Male’ was used to describe a person in government whose job was to remember what the King was to do and then to tell the King.

They might remind the King ‘You have an appointment with such and such.’

They might remind the King of a ruling or edict that had been passed. They bring the Kings attention to it.

A Male is one who remembers – the remembering one.

A man is to remember the character and nature of God. Who God is, what God is like, and then to use this in all that they do in life.

Men are in crisis

They found him hanging in his garage.

No one knew that this supposedly strong man, a pillar of the community, loved family man was carrying a load too heavy for any one man to carry.

It all got too much.

He couldn’t see a way to resolve the financial pressures he was under.

He carefully presented to the viewing eye a man who was ‘all good,’ yet on the inside, he felt both impotent and weightless.

He wouldn’t have used those words. He couldn’t describe what he was feeling. Men struggle to put into words the inside stuff.

He had tried various ideas to solve the problem, but in the end, they just added to the weight on his shoulders.

The sexual definition of being impotent is around the inability to maintain an erection or achieve orgasm.

In mental health terms though it’s about the inability to move into the world and to make a difference.

‘Whatever I do it doesn’t change the problem.’

Ask a man how he feels when his attempts to enter the world of someone close to him are met with resistance, mocking or ambivalence.

He will eventually give up.

Worse still will be the loss of confidence that what he has inside, his potent,  has any value at all.

Depression (performance not meeting expectations) grabs the subconscious and builds a wall. No one can get in, and no one wants to come out.

It was ‘one small step for man, one giant step for mankind’ and the weight of Neil Armstrong imprinted his space boot on the dust of the moon.

The imprint is still there.

To be weightless is to have left no mark.

To be weightless is to have not made a difference. That there is little consequence to the world of relationships, we exist in.

I need a man

I’m looking for a man. Someone who will be daring and brave enough to enter the world I am in.

Humble enough to recognize his flaws and failings yet he still moves. He still tries to make a difference.

His self-worth is based not on performance but on the willingness to move and try. Daily he arises and throws himself into the battle.

Men compare themselves, and the results can be sagging depression and performance anxiety.

Real men leave no men to die on the battlefield of life.  Real men say ‘Oh so you too and I thought I was the only one.’

A man needs to name

The very first activity that the first man Adam was given was to be creative. He was asked to name all the animals.

God said, “It’s not good for the Man to be alone; I’ll make him a helper, a companion.”

So God formed from the dirt of the ground all the animals of the field and all the birds of the air.

He brought them to the Man to see what he would name them. Whatever the Man called each living creature, that was its name.

The Man named the cattle, named the birds of the air, named the wild animals; but he didn’t find a suitable companion. Genesis 2: 18-20 (The Message)

Adam remembered the creative nature of the threefold dancing community he was breathed out of. Out of this potent, he moved.

He brought the weight of all this creative potential to bear on naming the creation. It was good, very good.

The Glory of God is man fully alive.  St Irenaeus

I’m not going to tell you. Instead, I invite you to pray and ask God to reveal examples of men acting fully alive.

Then can you please …

Invite them to continue moving into your world and the world of others.

Men will falter and fail but will rise with the help of a few vulnerable others to be men of potency and weightfulness.

I’m an All Black and I’m OK