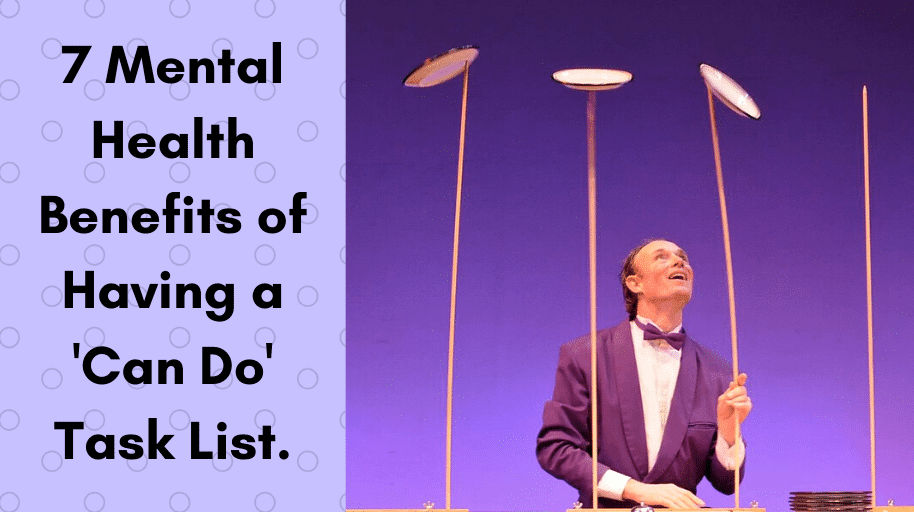 Are you superhuman? I’m not and having multiple plates spinning at one time can create a lot of tension and stress in my life.

I remember as a kid watching someone spinning plates on the top of long poles. They would get the plate spinning, then move on to the next one and then the next one. All the time looking at all the plates spinning and rushing back to those that were slowing down.

Maybe it was this guy on ‘The Ed Sullivan Show’ (shows my age).

At times life can seem like a whole lot of spinning plates. You could probably list off a number of plates spinning in your grey matter right now.

Then you realise that you haven’t done this task and you really should do this and you could do this. On and on it goes, round and round creating pressure. Then one of those plates falls, smashing on the floor.

Here is a trick I learned.

Only do what you can do. Not hope to do, should do, or could do.
And please stop shoulding on yourself.

One of the things you can do is create a task list.

7 Mental Health benefits of having a ‘can do’ task list.

1. Unclutters your brain. Do you have too much traffic in your mind? So many things going around in the brain that you feel like you are just living in a whirlpool of things to do, ideas to chase, and ‘must do’ moments.
Perhaps having a task list will start to solidify what needs to be done.

Tomorrow is often the
busiest day of the week. Anonymous

2. Deflates the ‘overwhelmed’ feelings balloon.
Feeling overwhelmed? So often for me, the feeling of having a large number of things to do is greater than the actual reality of what those things require.
Having all these things to do seems daunting and overwhelming. The task becomes unrealistically out of proportion to the actual size.
Having that a list and breaking down the list into smaller chunks deflates the feeling of it being too much.

3. Makes creative space.
I find that once you have got that task written down then it creates a space in your thinking for you to turn your focus on how to do that task.
So often after doing this the task feels like it is already half done.

4. Pushs the Pause button.
Having to stop just for a minute to plan creates a sense of pause. You don’t need to rush at all the things to do.
Pause, focus, think plan. Develop a little mini habit of say ‘Spending one minute each day to pause and plan’.

There is more to life than increasing its speed. Mahatma Gandhi

5. Stimulates a sense of achievement.
I love to be able to tick that box and draw a line through that task. It just feels good and my brain enjoys the success.
It enjoys it so much that it will form a pathway that invites me to come and do it again.

Seriously, if you are deeply depressed then having a task list with one item such as ‘brush teeth’ maybe the gold medal award task for you today. Just because it may seem small doesn’t mean it isn’t important.

Don’t let others’ expectations or even your own diminish the power of taking one small step. Maybe even getting dressed may be a feat of heroic proportions. Well done, tick it off, cross it out, write DONE in big bold letters.

You are training your brain into achievement thinking.

6. Builds Confidence.
If I have done this once and succeeded then the odds of doing it again and succeeding are high. Confidence builds upon itself and the brain forms new pathways when of achievement.

Lists help us remember the things we need to remember — but not memorize. Cynthia Green

7. Substitutes for hindered memory.
Often with mental illness, the memory and the ability to focus can be affected. I have found this with my depression.
So by having a ‘to-do list’ and a little notebook to capture items has really helped me to overcome this problem.

What tools do I use?

There is an abundance of tools you can choose from. I think it is really important to choose the one that is most simple and easy to use for you. I use both electronic and paper.

Before you get anything else, get organised. It will always save you time and trouble and unneccessary anger. David Riddell

I have only recently discovered this great application. It links into my Gmail account, I can create lists, add links to articles, color code items, set reminders, voice memos, collect photos. It is web-based so you have to go online to use it, but there is also a mobile app for android users.

Paper is just a simple notebook for on the go writing stuff down. I find that by the time I take to pull out the phone, tap on buttons etc I could have written a short note in my little notebook.

I use a small Moleskin notebook that can easily fit into my pocket with a pen.