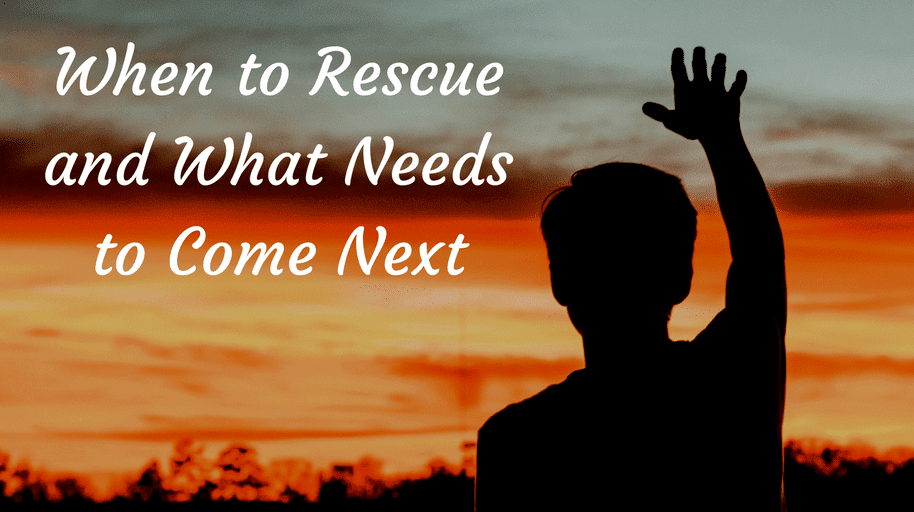 There is a time for everything, including rescuing, but let’s focus on the rebuilding through empowerment.

It was one of those lightbulb moments for me.

I had just discovered something new that threw some new light on an old struggle.

Ever had one of those?

I outline these and 8 other principles of how Jesus demonstrates empowerment in my eBook So you want to help.

1 Jesus did for us what we cannot do for ourselves.  Isaiah 53: 4-6
I can try all I want to live a perfect life of sinlessness but I fail dismally every time.

Jesus did something that I just can’t do. I needed this. I needed a rescuer. I was lost at sea in my attempts to be right with God. Jesus lived a perfect life on my behalf. There are no more brownie points to be earned to please God because Jesus has done it all.

Jesus is the perfect rescuer, doing for me what I am totally incapable of doing myself.
2. Jesus does not do for me what I can and should do for myself.
I so want Jesus to swoop in from the heavens and sort out all my issues. That he would wave his magic wand and make all my problems disappear.

I don’t see Jesus doing this.

Instead, I hear Jesus saying to the crippled man ‘take up your bed and walk’. Asking the disciples to go and find food for the starving 1000’s. Inviting Peter to walk on water.

In the story of the Man in the Ditch, aka The Good Samaritan, we see both these principles being played out by the actions of the Samaritan.

But a Samaritan while traveling came near him; and when he saw him, he was moved with pity. He went to him and bandaged his wounds, having poured oil and wine on them. Then he put him on his own animal, brought him to an inn, and took care of him. The next day he took out two denarii, gave them to the innkeeper, and said, ‘Take care of him; and when I come back, I will repay you whatever more you spend.’ Luke 10:25-37

I think I was led astray by the Good Samaritan

Or perhaps the version I was guilt tripped with.

That I need to rescue, that I need to do everything for others. Fuelled along by songs such as J.O.Y. (Jesus first, Yourself last and Others in between sung to the tune of Jingle Bells) the thinking beliefs took shape.

Add to this the victims who have unrealistic expectations of you, to be like Jesus and rescue them, then it just becomes a recipe for burnout and being bummed out.

Taking it into the context of Mental Health.

In the 20 years of working at the coal face of people struggling with Mental Illnesses, there were only probably 4 or 5 times where I had to be a rescuer.

There was a level of unwellness that had rendered the person incapable of making sound rational decisions. I would see this in expressions of psychosis, mania, or depression etc.

If I didn’t intervene on their behalf then the illness would progress and the situation may become dire.

My intervention would often be to contact others in their support team such as doctors, nurses etc to get them the help needed. I would ‘rescue’ them to the point of getting them to those who could help in ways I wasn’t able to. Getting them to the Inn and the Inn Keeper.

I would keep in contact and offer what support I could.

I am wary about Community Meals.

For 13 years I pastored a church within a church for people with disabilities, primarily mental health related disabilities.

At the end of the year, we would have an end of year dinner. Often I would be approached by people in the larger church that were not involved with The Living Room but with a desire to cook the meal for them. Lovely you might think, generous, kind, thoughtful. [pullquote]When we do for those in need what they have the capacity to do for themselves, we disempower them. Robert D. Lupton[/pullquote]

I politely said ‘No’ and explained that the people within the Living Room would be the ones who would be doing the cooking, serving and cleaning the dishes. I was about empowering the community with something they could do themselves. They so enjoyed the camaraderie of the event and all went away buzzing with the opportunity to do something like this.

An area where I did ask for help was in the area of transport. Something many of the people could not do by themselves. Volunteers gave time and were rewarded with relationships that changed them in deep and meaningful ways.

Lives were changed because there was a culture of empowerment.

So often our love for someone, our desire to heal their pain and to solve their problems may just be getting in the way of them working on the issues themselves.

There is a time for everything, including rescuing, but let’s focus on the rebuilding through empowerment.