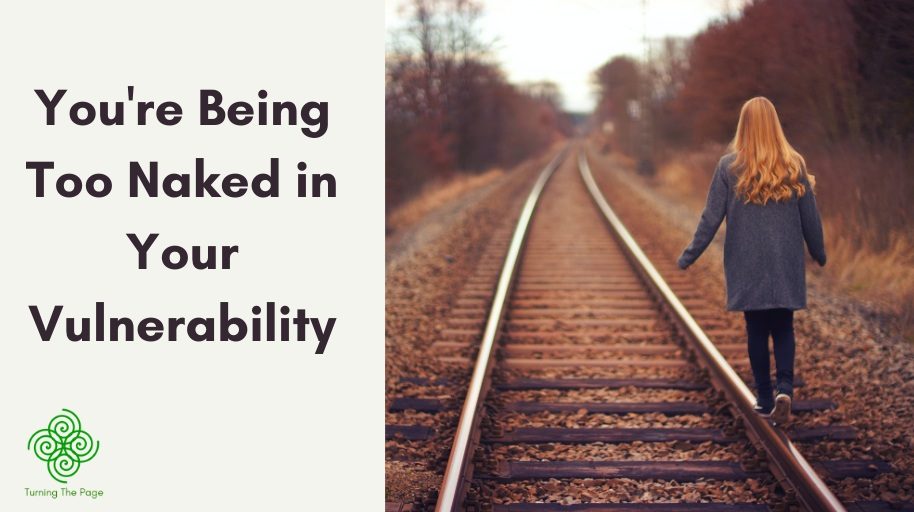 They were too naked in their vulnerability. Too much too soon, but with careful listening, time, and respect, they began to feel deeply known.

They had been too naked with their vulnerability. They thought they were safe with this friend, that what they shared wouldn’t be exposed. But it was told to others, and now they had closed up and remained unknown.

When you’re naked, you’re open to critique, you’re vulnerable to both rejection and acceptance, and you’re never quite sure which way it will swing.

So now they share with no one. Everything is masked up and hidden away.

Perhaps one day, they will find the presence of someone that can listen to the naked vulnerability of their story and sacrificially clothe them with acceptance.

The Eden desire to be known

What would it be like if you were to be known fully by one person and, most importantly, loved for everything you are.

It’s probably difficult to grasp this because we are so aware of our flaws and failings but in this instance, try to imagine there would be nothing of that.

Nothing to hide. Everything open and perfect. You would be translucent, and others could enjoy the uniqueness of you.

I still long for the kind of love that we first felt back in Eden.

To be known and have unselfish love flow towards me and from me to others.  A ‘suitable helper,’ a ‘soul mate,’ someone to be ‘soul naked’ in front of and feel no shame.

Adam and his wife were both naked, and they felt no shame. Genesis 2:25

I want to be known, and so I open the door and hope someone will provide some Eden interest in my heart.

You see, we still have the scent of the Garden wafting deeply through our subconscious. We want to be known, but often we feel unknown, alone, invisible, and sadly a kind indifference from others.

It’s not self-centered this desire to be known.

You may well be thinking that this desire to be known sounds very selfish. That it’s all about you and meeting your needs.

But it’s not because you were made and created in the spirit of deep community. We were made for translucent communion with each other.

Deep in your heart, you also want to know at least one other person where you can commune with oneness. You want to meet them in their unknownness.

It may be scary to get to know the other at a deep level. It might hurt and push some of your own buttons. But deep down, you want to know them and be with them in their place.

I was in conversation with someone the other day, and I was deeply and genuinely curious about something they said. We talked briefly about many different things, but most of all, I wanted them to feel known in the struggles they were facing. Not to be F.A.S.S.ed – fixed, advised, saved, or set straight.

If you want to know anyone at any great depth, then there has to be a payment made of time and respect.

I love the game of Cricket, especially test match cricket. This is the game that can be played for 5 days, and at the end of the game, it can be a draw.

I try to describe a great test match as a 5-day arm wrestle where both teams are wrestling to the bitter end.

I want to know the game and everything that is going on, so recently, I signed up for a pay-to-view subscription with a local internet provider to see the matches.

Relationships work in a similar way, and the currency is time and respect.

How many times do we only find out something deep and quite significant about someone after we have walked with them for many, many years?

It’s like we have to pay the due of time and respect before the trust was built enough to allow the other to feel safe to be known at that next level.

A spouse discloses how they were abused as a child. Only after years of observation and trust-building have they felt room for them to be known.

You’re too naked too early.

At times I have had conversations with people who have been quick to tell me the dark stuff. It’s like this is their identity, and they want me to know it. They go too naked too early.

Every layer reveals something deeper about the person: a new level, a new revealing.

More often than not, though, tears of connection need to be mutually expressed with each disclosure.

When people reveal themselves too early, I want to reclothe them and get to know the outer layers first. It’s fitting and respectful to know the whole before exploring under the skin.

Perhaps too naked too early is a desire for validation of pain.

Vulnerability minus boundaries is not vulnerability.
It can be oversharing, it can be shock and awe, it can be attention-seeking, but it’s not true vulnerability.
Because what you’re looking for usually when you broadcast is validation of pain, not connection. Brene Brown Podcast – A bit of optimism with Simon Sinek (30 min)

Jesus didn’t broadcast his struggles. He didn’t tweet out the wrestle in his internal world. Instead, he invited a few close friends in.

We find time and time again that he spent most of his deep onion layered time with three men and one woman – James, Peter, John, and Mary.

The night before his crucifixion, he pulled them aside and went into a garden.

They came to an area called Gethsemane. Jesus told his disciples, “Sit here while I pray.” He took Peter, James, and John with him. He sank into a pit of suffocating darkness. He told them, “I feel bad enough right now to die. Stay here and keep vigil with me.” Mark 14:32 -34

Mary stood both at the base of the cross and waited at the tomb.

Early on the first day of the week, while it was still dark, Mary Magdalene went to the tomb and saw that the stone had been removed from the entrance.  John 20:1

Jesus felt safe to be known by these four.

John, though was probably the one that Jesus allowed to come in the closest. John wrote the love story of Jesus’ life and then wrote love letters to the early churches.

I think John smelt the perfume of the Garden of Eden reaching over the walls more than anyone else. He himself felt known and offered the delight of being known back to the Christ.

I spend much of my time in various people’s gardens. Pruning, weeding, spreading compost, planting, etc.

Occasionally I smell the perfume of a beautiful rose coming to my senses. I seek it out and find it bringing out its colorful scented glory. I stop and smell the roses. I take deep draughts of perfume into my soul and give thanks. I know the rose and am thankful for its exposure.

I often smell something of Edens’s delight in the lives of the people I meet. There is something that I must seek out and know.

They might consider themselves as woody, thorn-covered, and thoroughly ugly, but with time and consideration, there is a beauty and purpose that is expressed and known.

To know someone takes time and respect.

The God Who Enters My Shame

To the Power of Being Known

Photo by Johannes Plenio on Unsplash</a